If you go through your mornings feeling like you’re walking through mud and can’t concentrate at work- even after your 2nd serving of caffeine, you may be suffering from something known as brain fog.

This is serious issue for thousands of people worldwide that struggle with fatigue and poor memory.  In fact, there is an entire industry devoted to mental focus and energy these.  We have tested a number of new supplements to address brain fog over the years but we did not try the original mainstream focus supplement until recently.

What Is Focus Factor? 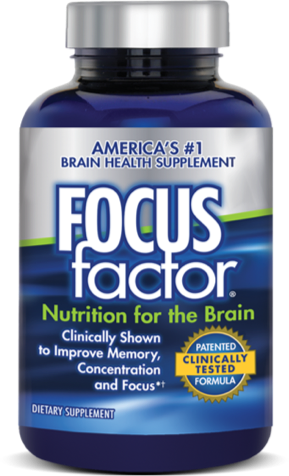 In fact, a clinical study showed that adults who took Focus Factor for six weeks (as directed) saw an improvement in concentration, memory and focus *^.

Those are pretty impressive results. But how does this supplement work?

It all comes down to the ingredients – all of which have research backing their effects.

Known as “nutrition for the brain,” Focus factor feeds the brain using a mix of vitamins, minerals, botanicals and other nutrients.

Along with core essential vitamins and minerals, like vitamins A, C and B12, the supplement also contains Focus Factor’s proprietary blend of ingredients. The proprietary blend is what wakes the brain up and kicks it into overdrive.

Dimethylaminoethanol, or DMAE, is naturally produced in small amounts in the brain, but you can also get this nutrient from sardines and anchovies.

Research suggests that DMAE can help increase acetylcholine levels, which play an important role in memory and learning.

Choline plays a role in the creation of acetylcholine, a key neurotransmitter in focus and learning. A deficiency in choline can lead to difficulty concentrating, mood changes, poor memory and other cognitive impairments.

Research has shown that L-pyroglutamic acid, an amino acid, encourages the release of acetylcholine. It also helps preserve acetylcholine levels in the brain and can protect against further damage.

DHA, or docosahexaenoic acid, is an omega 3 fatty acid associated with brain power. Research shows that DHA specifically has the most benefits to brain health and memory. In fact, studies have shown that people with Alzheimer’s disease have very low levels of DHA in areas of the brain associated with memory formation.

Phosphatidylserine is a phospholipid that’s found in all cells, but is most highly concentrated in the membranes of brain cells. It aids in:

Research shows that supplementing phosphatidylserine can slow down or reverse the decline of learning, memory, mood and concentration.

Inositol is found primarily in the brain, where it helps cells communicate. All major neurotransmitters, including serotonin, dopamine, acetylcholine, GABA and norepinephrine all rely on Inositol to relay messages.

N-acetyl tyrosine (NALT) is a modified version of the L-tyrosine amino acid. It works to improve working memory, reduce stress and enhance your overall feeling of wellbeing.

Bilberry fruit is rich in antioxidants that fight against free radical damage in the body. The fruit has been used in the treatment of glaucoma, cataracts and joint disease. It’s also been used to prevent brain aging.

Oxidative factors are believed to be a key factor in brain aging. The high levels of antioxidants in bilberry fruit can help combat oxidative damage.

Focus Factor also includes Bacopa Monnieri extract, which has been used in Ayurveda for centuries. Research has shown that the herb can help improve reaction time and recall while boosting multitasking performance and reducing anxiety.

GABA is the brain’s inhibitory neurotransmitter. It stops our “always going” minds so that we can relax and unwind.

GABA slows down signals between neurons, making them less excitable. Why would you want this effect? Slowing these signals helps quiet the mind and allows the body to relax, unwind and sleep soundly.

Vinpocetine is a synthetic alkaloid derived from vicamine, which is the main component of the lesser periwinkle plant.

It was first synthesized in the 1960s, and it has been used to improve brain health and cognition ever since.

Vinpocetine improves blood flow to the brain, which provides the brain with vital oxygen, glucose and other important nutrients.

Huperzine A is derived from an extract of firmoss, a plant that’s native to Southeast Asia and India.

The compound has been shown to improve memory. It acts as a cholinesterase inhibitor, which means it has similar effects on neurotransmitters as FDA-approved drugs for the treatment of Alzheimer’s disease. These effects include an increase in acetylcholine levels.

Boron is a trace mineral that’s found in food and in the environment. It’s been linked to improved brain function. It helps boost focus, concentration and the ability to learn new information. 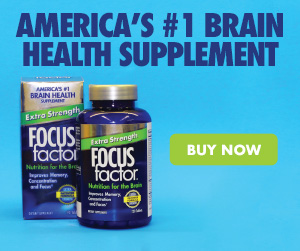 Focus Factor also contains other “focus vitamins,” minerals and nutrients that help with the absorption of the proprietary ingredients.

Focus Factor contains a wide range of vital nutrients that your brain – and body – need to perform at optimal levels.

But Focus Factor reviews from actual users also serve as proof that this supplement can help banish your brain fog.

Many people say they notice a difference right away or within just a few days. People say it improves their concentration, memory, focus, sleep and energy levels.

But some people do experience side effects. The most common side effect is headaches, but a few people have complained about the supplement making them feel depressed.

Focus Factor is a potent supplement, and it contains a wide range of nutrients. The people who had negative side effects could have been detoxing or needed to start off with a lower dose of the supplement. It’s not uncommon for nootropics to cause headaches, so it’s important to get the dosage right.

You may need to start off with a lower dose than the recommended amount and work your way up to it.

Can Focus Factor be Used with Kids?

Kids battle with brain fog, too. Some are fighting ADD or ADHD, which makes it difficult to concentrate.

Focus Factor for kids comes in a chewable form that is easy to digest. The chewables taste great (berry flavored), so kids actually look forward to taking them.

The Kids Extra Strength version is formulated with:

All it takes is just two tablets per day for kids to start seeing results.

As you can see, the kid’s formula is very different from the adult’s formula. It may not be strong enough for teens who need help focusing in school. Teenagers can easily take any of the adult formulas without issue.

Along with the original formula, Focus Factor also comes in Extra Strength and Brain and Vision variations. The Brain and Vision formula also contains Zeoxanthin and Lutein for better eye health.

If you’re tired of battling brain fog day after day, Focus Factor may be the solution you need. The ingredients, backed by research, work to improve acetylcholine levels while helping you feel more relaxed. Plus, the antioxidants fight back against free radical damage – a key contributor to cognitive decline. 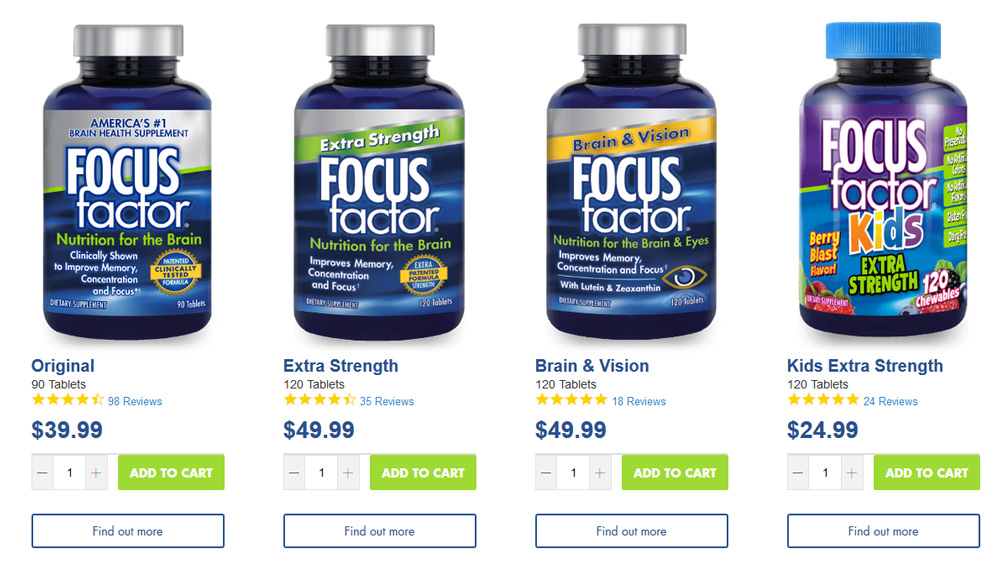 * This statement has not been evaluated by the Food and Drug Administration. This product is not intended to diagnose, treat, cure or prevent disease including adhd and alzheimers. Results may vary.^ A clinical study showed an increase from 4.5 words from placebo group to 6.5 words for Focus Factor group was experienced after 6 weeks.