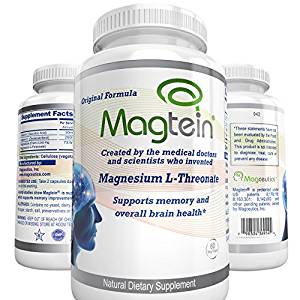 I’ve lived with brain fog for most of my adult life. Some days, it feels like I’m drudging through mud trying to get through the simplest task. It’s hard to stay focused and it’s hard to truly listen to what people are saying when your brain is in a constant “funk.”

If you’re in the same boat as me, you’ve probably been told that it’s your diet, your sleep habits or caffeine habits. But what if you eat relatively healthy, get enough sleep and don’t overdo it on coffee or tea?

Magnesium Effects on the Brain

Research has shown that nutritional deficiencies can affect the brain and actually contribute to inflammatory issues in the brain, like anxiety, depression, memory problems, insomnia and other brain-related issues.

Magnesium, which is lacking in most modern diets, can help ease or eliminate many of these issues.

Magnesium has a direct impact on the transport of p-glucoprotein and can impact the brain’s access to corticosteroids.

New research is pointing to a connection between magnesium deficiency and depression. In one study, researchers look at case histories showing rapid recovery from depression using 125-300 mg doses of magnesium with each meal and before bed. The supplementation was found to be helpful with headache, traumatic brain injury, anxiety, suicidal ideation, postpartum depression, insomnia, short-term memory loss and other brain issues. The researchers concluded that low magnesium levels may be a contributing factor in many brain- and mental-health related conditions.

In yet another study, magnesium intake was shown to be linked to depression risk. This study included 20 years of follow-up. Hospitalized patients who received moderate dietary magnesium were far less likely to be discharged with a diagnosis of depression compared to those who had the lowest intake of magnesium.

Magnesium ions are considered “gatekeepers” between cell membranes and N-methyl D aspartate neuroreceptors. These neuroreceptors are responsible for both long- and short-term memory.

If the body doesn’t have enough magnesium, ions are free to flow, which can cause cell death as well as memory-related issues.

Magnesium has also been shown to be an effective supplemental therapy for Alzheimer’s disease.

One study on mice found that dietary intake of magnesium had a positive effect on brain synapses and actually restored aging brains to their youthful conditions.

Magnesium deficiency is also closely linked with migraines. It is believed that migraines occur because muscles in the brain start acting erratically. When these blood vessels constrict and dilate abnormally, it can cause migraine pain.

Calcium causes the muscles to contract, while magnesium causes them to relax. An improper balance can lead to frequent migraines.

As you can see, magnesium affects the brain in many ways. And when you don’t have enough of it, it can impair your memory and cognitive function.

The effects of this novel form of magnesium were discovered by researchers at MIT. Researchers found that magnesium L-threonate had the highest bioavailability.

Studies show that this form of magnesium can improve brain plasticity, which can directly and significantly improve learning, memory and cognition.

A new human study has also shown that after 12 weeks of supplementation, magnesium L-threonate not only boosted cognitive test performance, but also reversed brain aging by more than nine years in older adults with cognitive impairment.

Magtein is a magnesium supplement that contains a unique patented formula designed to improve brain function and ease anxiety.

Both vitamin C and D aid in the absorption of magnesium, so you maximize the benefits of this crucial mineral.

All it takes is just two capsules per day to realize the benefits of magnesium, and each bottle contains a 30-day supply.

What can magnesium L-threonate do for you?

The makers of Magtein aren’t just spewing baseless claims when they talk about the benefits of their products; they actually provide the research to back them up.

Their research has shown that Magtein improves both short- and long-term memory as well as spatial working memory in animals.

When giving animals different forms of magnesium, the subjects taking Magtein were the only ones that saw a significant improvement in short- and long-term memory.

Researchers also evaluated the spatial long-term memory of both young and old laboratory animals. Animals were timed to see how long it would take for them to find the hidden platform. In both age groups, the animals taking Magtein had statistically higher spatial working memory. And their spatial working memory was reduced to background levels two weeks after they stopped taking the supplement.

Animal studies also showed that magnesium L-threonate reduced fear-related memories and prevents these memories from becoming over-generalized. These are two factors that contribute to anxiety.

Where to Buy Magtein?

The original Magtein is available on Amazon with free Prime shipping. One bottle provides an entire month’s supply of this supplement.

The great thing about buying through Amazon is that you don’t have to worry about waiting a week for your package to arrive, and you also get Amazon’s 30-day return policy. If you don’t like Magtein or feel that it doesn’t work for you, you can return the product. 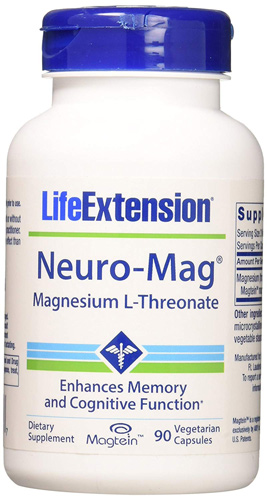 If Magtein is out of your price range or you have a problem with supplements that have vitamin C and/or D, Neuromag by Life Extension may be a good alternative for you.

Neuromag contains slightly less magnesium L-threonate (144 mg vs 147 mg) and it also does not contain vitamin D or C to aid in absorption. But each bottle contains 90 capsules and you get a pack of two with each purchase.

Magnesium is a powerful mineral – one that we don’t get enough of. Supplements can help, but for brain fog, you need something more powerful; something that will actually pass the brain-blood barrier.

That’s where magnesium L-threonate comes in. Magtein’s high concentration of this unique form of magnesium and the addition of vitamins C and D allow you to maximize the brain-boosting benefits of this mineral.