Marijuana & Sex: Elevate Your Experience with The Volcano Vaporizer & Weed

Weed and sex – does it enhance the experience?

A lot of people prefer smoking weed before they have sex, and it’s a great way to have a release without all of the pressure or anxiety attached.  It’s more satisfying and can make your orgasms more intense.

Why Do People Prefer High Sex?

High sex is the best sex, according to many smokers, and all it takes is one or two tokes for the experience to be amplified. One sample found that women that used cannabis had a better overall sexual experience.

Nearly 70% of the 176 women stated that marijuana made the experience more pleasurable.

But that’s not the end of it.

Lubrication levels did not change during sex, so this may be a good or bad thing, depending on your own preference.

Another study found that there was double the odds of having a satisfying orgasm during sex when they smoked marijuana beforehand compared to women that did not smoke. There’s a lot going on when a person smokes marijuana and has sex.

What Does Weed Do to You Sexually?

Researchers claim that more people are smoking before sex, and this isn’t necessarily for the sexual benefits for all people. Understanding why marijuana boosts the sexual experience is difficult, and there are a lot of different variables at play.

We do know that marijuana relaxes a person and can relieve anxiety, so this leads to a better overall sexual experience in itself.

But there’s also the human factor at play.

Everyone has their own reason for smoking before sex.

Some smoke because of:

Women that have difficulty reaching orgasm will smoke because it relaxes the body and allows many of these women to reach orgasm. And who doesn’t want to orgasm? It’s a pleasureful experience.

The studies on exactly why marijuana enhances sex are lacking, but it’s suggested that the cannabinoid receptors in the body may have something to do with it. When you smoke cannabis, you’re stimulating these receptors, and this stimulation occurs in the same part of the brain that’s responsible for many of the hormones that are regulated during sex.

In women, marijuana is being tested as a way to help overcome sexual dysfunction.

Studies from 2003 onward have mixed results, with about half of participants claiming that marijuana enhanced their sexual experience.

Independent studies also show that marijuana is able to:

Very few people, 12%, claim that marijuana destroys sex for them. This is highly dependent on the person, and one of the main factors involved is the strain of marijuana used. Indica strains work best for most people, while sativa should be avoided as it will make the mind wander and make it more difficult to have sex.

Hybrids seem to work best because while indica will allow a person to relax, sativa will also help boost energy and can help take a lot of the “feeling” out of the body. It’s fun to experiment with hybrids, so make sure that you give a variety of different marijuana strains a try.

What is the Best Way to Smoke Marijuana Before Sex?

If you’re going to smoke marijuana to enhance your sex life, don’t wait until the night you decide to have sex to give your desired strain a try.

You don’t want to ruin your first sexual experience with someone by trying out a new strain or trying marijuana for the first time.  We certainly recommend testing a small amount out before the main event to make sure you have no adverse reactions.

With safety taken care of, you want consider your health too.  The days of smoking harsch chemicals in joints have long passed.   These days, a much healthier alternative to traditional combustion is to use a vaporizer.  A lot of people prefer a high-end vape to smoke their marijuana in for the best sexual experience.

The reason that people choose vaporizers is because it allows for a discreet way to smoke, allows for pure marijuana and can be adjusted to provide the high that a person prefers.

In our exerpience, the absolute best way to smoke weed is with the Volcano Vaporizer from Storz & Bickel.

The Volcano is a medical grade, industrial quality vaporizer from Germany.  Studies have shown it to be the most efficient way for medical marijuana patients to get their medications.

While many people believe that edibles are the right choice, and they can be fun, especially with some food play. But the problem is that it’s hard to measure the amount of THC in the brownies or whichever edible you’re choosing.  It is easy to overdo things with edibles, especially if you are not patient or experienced with edibles.

Edibles take a while to “kick in,” so you lose a lot of the control that you gain when vaping.

Traditional combustion smoking normally can lead to coughing fits and produces a harsh smell that may be a turn-off for your partner.

Vaping with the weed Volcano vape system eliminates the harshness, and the balloon bag lets you take small, smooth hits.

For those with the budget, the Volcano is the peak of vaping. 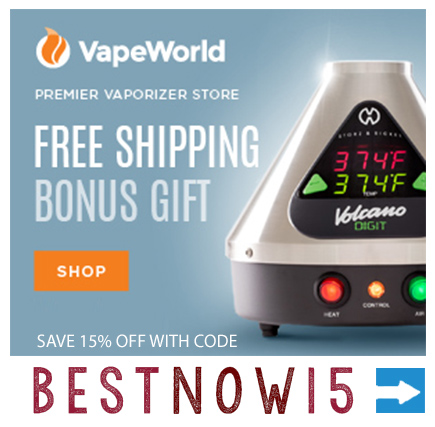 What is the Best Strain for Weed Sex?

This means going through a lot of experimentation.

You’ll need to give strains a try. This means going to the dispensary and asking workers which strain works best for enhancing the sexual experience. Workers at dispensaries are often very knowledgeable and will be able to lead you in the right direction for a strain that will benefit your sex life.

Now, a few of the best strains that are known for their aphrodisiac effect and sex-boosting properties include:

Again, everyone has their own preferred strain of marijuana when trying to boost their sex life. You may like one strain while another person will find that their sexual mood falls off when they smoke it. Take your time, try different strains with a focus on hybrids and see which one boosts your sexual experience the most.